Not knowing what is going on a server can be a recipe for disaster. That’s why I use Munin a networked resource monitoring tool that is both simple to install and understand. Munin graphs server performance over time, administrators can later use this information to make an informed decision about when to add more resources. From The Munin Site:

Munin is a networked resource monitoring tool that can help analyze resource trends and “what just happened to kill our performance?” problems. It is designed to be very plug and play. A default installation provides a lot of graphs with almost no work.

Note: You will need Root privileges Why guess when the right tools are available.

To start this tutorial you will need a web server, both Lighttpd and Apache will do the job. For this tutorial I will use Lighttpd which is available from the Ubuntu Repositories.

You will also need PHP installed on the system.

Since Munin will be running on only one system we will need the master and client installed on the same system.

When the installation in complete, open the Munin configuration file with your text editor of choice. Change the htmldir path from /var/cache/munin/www to /var/www/munin.

When Munin is installed in Ubuntu 10.04 the htmldir path changes for some reason. To have a functional installation we had to change the path on the configuration file, now we need to move the Munin directory out of /var/cache/munin/www into /var/www/munin with the help of the mv command.

Assign the Munin directory to the Munin user and group by using chown.

And now you can start Munin.

Munin can be accessed by pointing the web browser to: 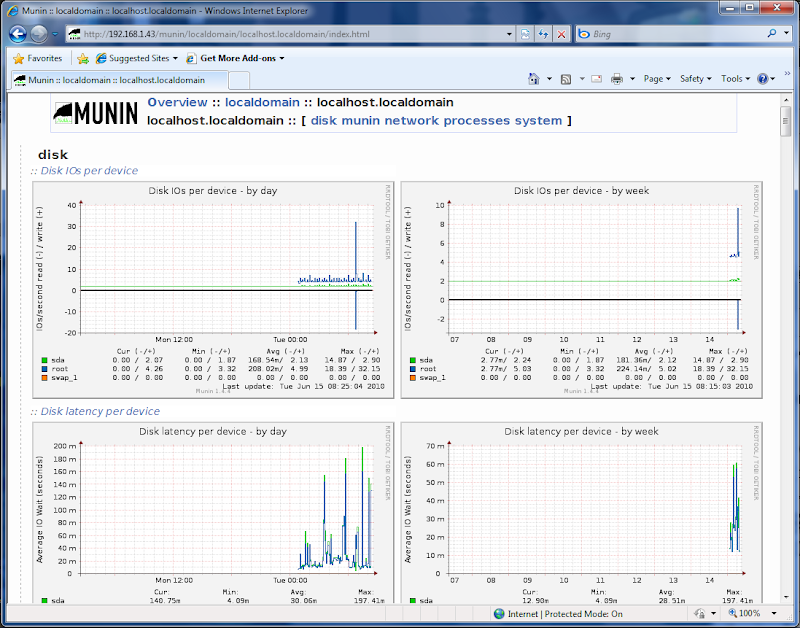 Remember that it will take a long time for Munin to display any meaningful information, be patient.